One of the most popular events during the White Hall Founders Day Fall Festival is our Annual Lions Club Pancake Breakfast held at City Hall. Tickets for the all-you-can-eat morning feast are available at the door. Adults: $8; Kids ages 3-10 years: $5; Kids under 3: FREE! See below for time.

Annual Lions Club Pancake Breakfast at White Hall City Hall. Tickets: $8 ·for adults; $5 for children ages 3 to 10; and children under the age of 3 are free. All you can eat plain, blueberry or chocolate chip pancakes served with milk, orange juice and coffee.

Annual Parade starts on Dollarway Road at Chipmunk and continues to Anderson Avenue, then to its conclusion at White Hall City Park. Winning floats will be announced on the John Terry Amphitheater stage when the parade finishes.

The Sixth Annual “Good Ole Boys” Backyard BBQ & Steak Cook-Off will continue to entice festival attendees with smoky aromas as they vie for top places in the competitions.

Local entertainers amaze and amuse on the stage of the John Terry Amphitheater.

Try your hand (or palate) at being a judge of the yummy barbecue ribs being cooked during the “Good Ole Boys” Competition. Buy 3 People’s Choice rib tickets for only $5. First come, first serve!

Jettway Band performs on the stage of the John Terry Amphitheater.

Zac Dunlap Band performs on the stage of the John Terry Amphitheater. 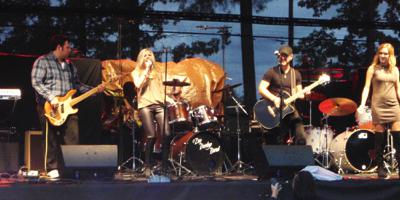 WATCH THIS SPACE FOR NEXT YEAR’S SCHEDULE!